﻿Who says 5 years of activity, says retrospective and what a beautiful retrospective that of the works.
We wanted to share with Gilles throughout this year the before / after work carried out in the bedrooms, the gîte and the exteriors.
For this first edition, we offer you the very beginning, our first real work with Gilles and our team of craftsmen in 2016 and 2017.

When we bought the house, we had no idea that the adventure would become what it is today. Our goal was to create two gites, one for 6 people and one for 4 people. Gilles kept his job and I devoted myself entirely to the rental business.
It is therefore in this perspective that we initially thought of the renovation of the building.
The annex building was not at all habitable and had no connection to water, electricity or sanitation.
Almost all the building trades have been there: digger, plumber, electrician, plasterer, mason.
Objective: to keep as many old elements as possible without putting modern comfort in the background.
After having completely demolished the floors on a part of the building, the electricity, the plumbing, the placo were carried out. At the same time, the sanitation was done, the connections to the buildings as well. Then our phase came to us: sanding, painting, earthenware, tiling and the best for last: the decoration.
June 2017, our first holidaymakers arrived in our two lodgings, l’Escapade and l’Évasion.
The peculiarity of these two accommodations is that after having been gîte between 2017 and 2019, they became guest rooms at the end of 2019. I had to find excuses to redo the decor, right ?!
Even if this reason holds up when I am known, another reason led us to this decision, and not the least, that of integrating Gilles into this activity which was to become the activity of both of us.
The story could have ended there and they lived happily and had two lodgings …
But you know that nothing stopped there and that it was actually just the beginning but that’s for a future newsletter … 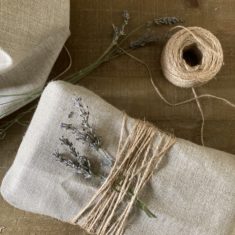